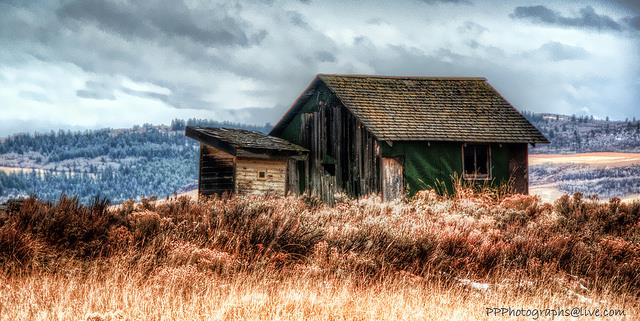 Pulling up into the old home place. Lightning, off in the distance, waiting for the rain to hit the tin roof. Simple sounds, back in a life that once used to mean so much.

He quit caring; pain never overcame, came no more, left it on the doorstep, last time he walked out.

Waking; coffee on the porch. A whistle….there used to be dogs. He whistled, once again…nothing!

He watched her pull her dress up to her knees; grass grown tall brown, sullen feet, wet with dew.

She followed him, lifting her dress so that it would not get torn by the grass that had grown almost into bushes, dry, crackling as she walked through its bristles.

He seemed hypnotised by the house in front of him towards which they were both walking silently. She could see from the stiffness at his neck and shoulders that he seemed to be in pain.

She wondered what that small run-down shack of a house with its small holes like a bean bag bursting at the edges could have held for him to be so much in pain at the sight of it.

All of a sudden he started whistling, as if to beckon a dog but nothing came. She watched silently as his shoulders hung in sadness and wondered if she should keep following him.

Yesterday, she would have gone up to him boldly and put her arms around him to make whatever pain he felt go away but today, after their fight and despite his seeming to forgive her, she felt that somehow she had no place in that pain he seemed to be feeling.

She slowed her pace and the leaves seemed to rustle even noisier as she toyed with the idea of running towards him and throwing her arms around his neck.

He had slowed down too, his back still tense, shoulders hung, head still facing the house and he raised his arms towards the sky

Remember who you are!

How To Become a Better Writer—Best Epic Fantasy Books

Travel is not Expensive, It is a Priceless Experience...